Sweden in Europe’s data ecosystem – so Swedish actors can use EU collaborations.

AI Sweden, DIGG, Vinnova, and RISE arranged a conference on 15 December 2022 to get business, academia, and the public sector to meet around the EU’s data ecosystem and explore a way forward together. Digitala Stambanan Produktion participated on site. 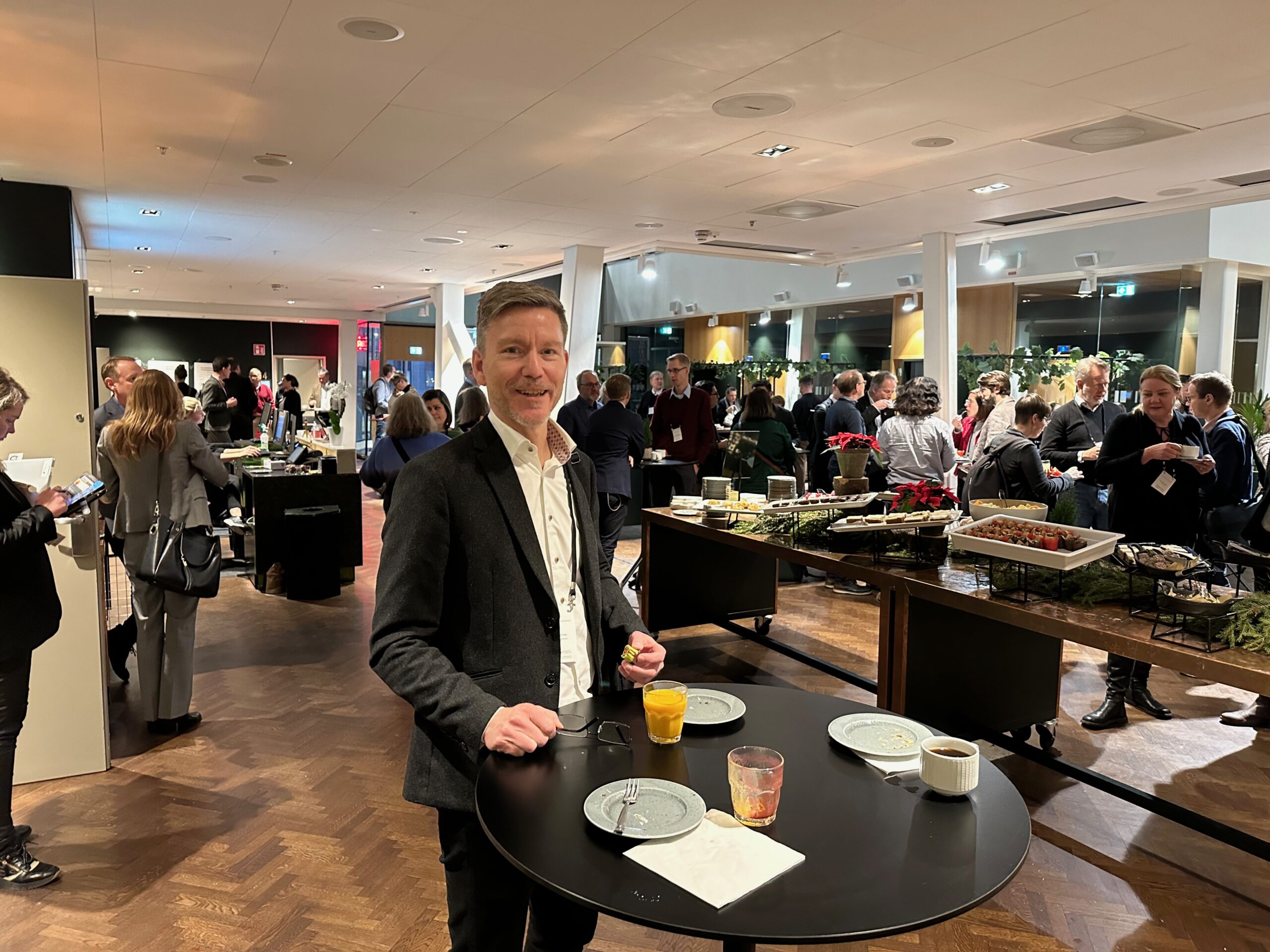 Close to 200 registered participants gathered in Stockholm for a day to discuss how Sweden, through Swedish companies, academia, and the public sector, can become even better at participating in Europe’s significant investments in digitalization and data. The conference was initiated by the authority for digital administration (DIGG), AI Sweden, RISE, and Vinnova. Europe’s internal market for data is being deepened through increasingly close collaborations. This means strategic opportunities for Sweden to get involved and influence the development of the EU’s AI and data ecosystem.

At the conference, participants learned about the latest developments in data areas, AI testbeds, and cloud-to-edge infrastructure in Europe. There were also opportunities to network with other actors and exchange experiences and perspectives through workshops. The conference’s main message was that Sweden needs more companies and organizations involved in European projects to be involved and influence Sweden’s and the EU’s future. Therefore, tips were also given on current and upcoming calls in the program for a digital Europe (DIGITAL).

Anna Eriksson, Director General of DIGG (The Authority for Digital Administration), initially emphasized that data is fundamental for innovation and development but must not live in silos. Data must be shareable! The European Commission is starting several important initiatives for Sweden to know about and participate in. One of these is called the DIGITAL Europe Programme, for which DIGG is responsible for coordination from a Swedish perspective, and contains the following parts:

Fredrico Milani, DG CNECT – The EU Commission then explained more about the EU’s strategy for data via a link from Brussels and how the EU wants to create a common platform for data, something called “A single market for data” within Europe. On this common platform, high-quality data must be able to be shared within and between sectors with high availability to create innovations. European laws and values must be fully respected, and it must also be clear how the data can be used and the quality maintained. This is supported by several different directives: the Data Act, Digital Market Act, Data Governance Act, Open Data Directive, Free Flow of Data, GDPR, and Vertical Legislation.

After Fredrico, Marina Bill from ABB took over on the theme “Why is data collaboration important for business?”. By reflecting on the megatrends: individualization, lack of labor, sustainability, and the uncertainty about the future we have today, Marina believes that production needs to become more flexible, which also requires lighter and more intelligent automation. Robots are occupying more industries; last year over half a million new industrial robots were installed. It is increasing worldwide compared to the pandemic year 2020, but the most significant increase is in Asia, followed by America. China has the most robots, but per capita, the country with the most robots is South Korea. It is noteworthy that China has climbed past Sweden on the list of robot density and is now in fifth place. Marina emphasized that collaboration is vital for the future and highlighted the initiative Adra (www.adr-association.eu) (The AI Data Robotics Association)

Jeanette Nilsson, RISE, then presented a mapping of critical initiatives in Europe and Swedish touch points.

On March 9, 2021, the EU Commission presented a policy program with a vision and different paths for Europe’s digital transformation until 2030, namely “Europe’s Digital Decade: digital targets for 2030“. The Commission presents a digital compass with the main goals of competence, infrastructure, business, public activities, and the values of people at the center, solidarity and involvement, freedom of choice, safety and security, participation, and sustainability. Based on this policy program, the EU will initiate projects involving several countries that scale up and combine the efforts of different countries to address the identified critical capabilities for the EU. Europe’s Digital Decade aims to hold together the investments within the programs Horizon Europe. CEF Digital  and Recover and Resilience Facilities. This is to support a connected, inter-operable, and secure Digital Single Market. Jeanette requested increased activity from the Swedish side as the agenda for 2025-2026 can still be influenced.

When asked what obstacles Swedish companies can see for European collaborations, the panel answered that it is often perceived as too complicated. An example of this is how projects are financed can differ, which does not directly make it easier for companies to participate. Therefore, EU-SME-support was highlighted as an essential resource for concrete and free expert advice.

Regarding what countries can do on a national level, Erik said that it could be wise to do like Germany, namely to start pushing an issue nationally and say it is a European project and then scale it up. Germany is generally very proactive and sets agendas for EU programs and projects. France and Finland were also highlighted as leading examples when it comes to European collaborations. It was also emphasized that collaboration is essential for finding talent, sharing knowledge, and keeping up with developments. It is simply not possible to do everything yourself.

The panel believed that the public sector can be better at sharing data and that there is great potential to improve cooperation between large companies and SMEs. This is where our project Digitala Stambanan Produktion has a good fit.

The panel also agreed that European collaborations also have a significant impact outside of Europe. The “Brussels effect” was mentioned, a term for the fact that standards and laws formulated within the EU often have a global impact.

In the AI testbeds track, several initiatives were presented to create AI testbeds to enable value-added and quality-assured data-driven services and solutions for the European market. This is done, among other things, within the EU program DIGITAL, where investments are made in Technology Experimentation Facilities (TEF).

Petra Dalunde, the TEF coordinator at RISE/AI Sweden, briefly presented AI-TEF Smart Cities and its Nordic node divided into Datafabriken (AI Sweden), Urban ICT Arena (Kista Science City AB), and Cyber Range (RISE). Micael Frideros from Linköping University talked about the importance of getting involved in EU networks and ecosystems. Daniel Lundqvist at the Center for Imaging Research at Karolinska Institutet spoke about AI-TEF Health and the Swedish AI-TEF Health node and how it contributes to precision medicine. Fredrik Viksten from AI Sweden gave an overview of how AI Sweden generally works and focused on its Edge Learning Lab. Björn Hovstadius from AI Sweden followed up by talking about the AI Act and the need for test beds. These short presentations were then followed up with round table discussions with the questions:

In the “Cloud-to-edge-infrastructure” track, the focus was precisely on infrastructure. In May 2022, RISE released the report “Data, edge, and cloud – Analysis and proposal for a strategy for Sweden” where you can read about the fight for data going on in the world. This struggle is at the highest political level as countries’ different legislation affects the data processed and stored in the various platforms available today. In Europe, the focus is on the individual, and we try to protect the individual’s privacy with legislation and regulations. At the same time, there are global interests in storing and processing data under cyber-secure conditions where the integrity, ownership, and accessibility of data of various actors are balanced against each other. For example, American legislation applies to American platforms regardless of where the data is stored. It has led to reactions in Europe. In Sweden, 35 authorities have taken the initiative to procure a communication and collaboration platform that is not governed by American law. Similar initiatives exist in Germany and France. The EU is also positioning itself against both China and the US through a data strategy linked to several research programs, the establishment of dataspaces for the trading of data (as Fredrico talked about, see above) connected to the service platform Gaia-X and not least through the creation of an industry alliance for data, edge, and cloud.

In summary, a lot is happening in Europe and the rest of the world on this topic. In Sweden, we have a lot of know-how and extensive experience with data processing and digital platforms, but we must participate more actively at the EU level. We should be involved and influence more of what is happening and participate more actively in projects such as the EU project Gaia-X. This requires even more collaboration between industry, academia, institutes, and the public sector. It also requires significant investments and a willingness to invest time and resources. For Europe, it is crucial that developed solutions make use of the EU’s internal market and not just the national. For our part in Sweden and Digitala Stambanan, we must focus more on the EU as a whole and not just Sweden and our own market.

From Digitala Stambanan Produktion’s perspective, there is a lot of competence and expertise available to learn AI, test their data, and create value, once companies have achieved a sufficiently high degree of digital maturity. However, most of the industry is still at a digital maturity level, focusing on connecting, collecting, and structuring data with a high enough quality to use it. We see that the industry’s interest in working digitally is continuously increasing, and there is enormous potential here. However, it requires focus and investment to drive digital transformation and improve the industry’s digital maturity.